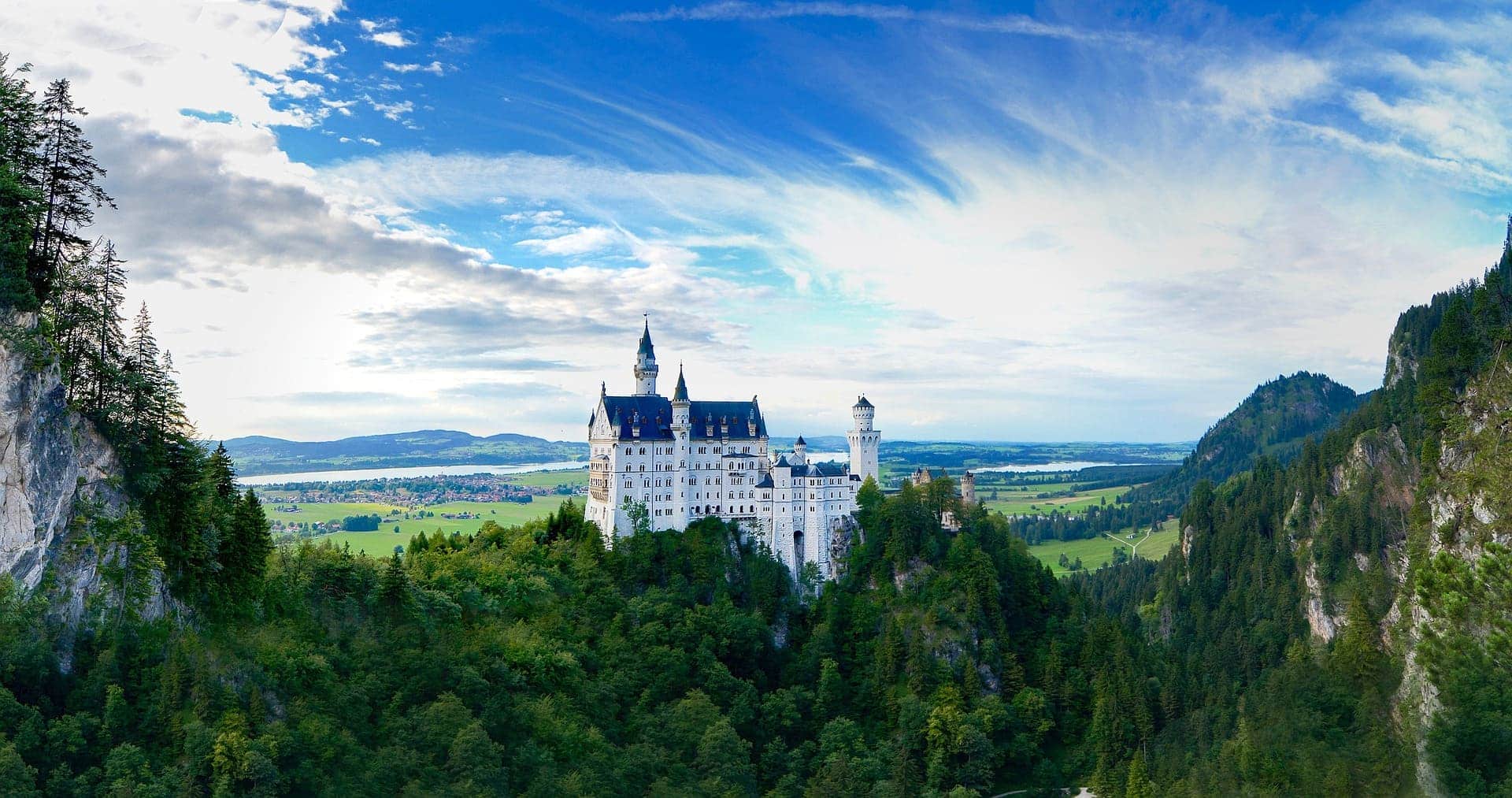 The Real-Life Fairytale Castle Of Neuschwanstein

If you are trying to find a real-life fairytale castle, the Neuschwanstein is a place you are looking for. The fairytale castle stands on the green hills in the Bavarian Alps, in a small village of Hohenschwangau, with towers, turrets, frescoes, and a throne hall. The view from the castle is stunning. It overlooks an Alpine lake and the largest nature preserve in Bavaria. Trust us, it will leave you breathless.

The Neuschwanstein castle is a fine example of European historicism and one of the last significant palace buildings in the 19th century. Today it is a part of UNESCO World Heritage.

An Iconic Example Of The Romantic Style

The Neuschwanstein castle with its towers and turrets is the iconic example of the Romantic style and remains a recognizable symbol of Bavaria and Germany.

King Ludwig II was inspired during his journeys in 1867 by two castles he visited, the castle Wartburg in Eisenach and Château de Pierrefonds. Christian Jank made the drawings modeled by these two castles, and the architect Eduard Riedel started the construction. The castle is planned as a neo-gothic building, but now it stands as a magnificent building in Romanesque style. King Ludwig hired more than 300 workers working the whole day and night using oil lamps. They used only modern techniques to build the Bavarian castle.

History Of The Mad King’s Castle

The castle embodies King Ludwig II of Bavaria. The famous Bavarian king is well known as the Mad King. During his reign he dreamt up and commissioned the building of the Neuschwanstein Castle in 1869. King Ludwig II spent his childhood in the Hohenschwangau Castle. He suffered from depression and shyness his whole life. He was only 18 years old when his father, Maximillian II of Bavaria, died. After accession to the throne, Ludwig II wanted to create a place to escape public life. He started the construction of a “New Hohenschwangau Castle”.

Even though the King used the best technologies for the construction of Neuschwanstein, the courts no longer had a defensive and strategic purpose. King planned to finish the Neuschwanstein castle in three years, but it took more than sixteen years. Unfortunately, the Neuschwanstein Castle was never fully completed. King Ludwig II died by mysterious death in 1886 without seeing the end of the construction of his dream castle. The castle construction stopped after King Ludwig II died. There are some rumors he was murdered or committed suicide, but king’s death is still a mystery. Seven weeks after his death, the Mad King’s castle was opened to the public.

Inside of The Neuschwanstein Castle – Castle Of Swans

The inside of the Neuschwanstein castle is as beautiful as its outside. The Mad King castle was built for his relaxation, and he adapted the castle himself. There are more than 200 rooms inside the Neuschwanstein, but only 14 rooms are fully finished. The rooms are majestically decorated. Wagner’s operas inspired images in the rooms, especially three characters repeat: the poet Tannhäuser, the swan knight Lohengrin and his father, the Grail King Parsifal. The swan element repeats in many castle images, and it represents the symbol of purity and tombs of Schwangau village.

King Ludwig II paired his love of medieval architecture with the latest modern techniques. Inside the Neuschwanstein castle, there are flushing toilets, hot and cold water in the kitchen, and a central heating system. The King also had an electric bell system and telephones at his disposal to servants who brought the food to him by elevator. He spent a lot of money, almost 6.000.000 DM, to use the latest technologies of that time and design the Neuschwanstein castle interior.

Byzantine churches inspired the castle’s throne hall. King’s wish was to put a throne in the place of the altar, but till today, there was never a throne inside of the Neuschwanstein’s Throne Hall. King saw himself as an intercessor between God and the world. These elements of his interpretation of kingship you can see on the dome, the aspects of the stars and floor mosaic beneath it, representing the earth with plants and animals.

The entire dressing room is finished with violet silk and rich gold. The King was obsessed with poetry, so the whole room is full of murals illustrating the works of Hans Sachs and Walther von der Vogelweide.

The Real-Life Fairytale Castle Of Neuschwanstein

The most remarkable room inside the Neuschwanstein castle is the bedroom of King Ludwig II. Inside the room, there is a silver-plated swan washstand carrying fresh water from the stream. The bed is made of oak in a neo-gothic style. The seats are covered in blue silk with swans, lions, crowns, and a Bavarian coat of arms. As an admirer of Wagner, there are elements of Tristan and Isolde as a leitmotif.

Explore the decorated rooms of the Castle by going on a guided tour of the Neuschwanstein castle!

On this 10.5-hour tour visit the magnificent castles constructed by Ludwig II of Bavaria. The first stop is the picturesque fairy-tale castle of Neuschwanstein followed by Linderhof castle, lastly you'll have lunch in Hohenschwangau. The tour will also take you through the tiny city of Oberammergau.

Take a full-day tour of the fairy-tale castle of Neuschwanstein, and it's neighbouring rustic town of Füssen. On your way to the castle you'll take a 2-hour train ride through the beautiful Bavarian landscape.

Best View Of The Neuschwanstein Castle

The best view of Neuschwanstein castle is the iconic view from Queen Mary Bridge which will leave you breathless. With this magnificent castle view, you will feel like you are in a real fairytale. This is the best place to take photos of the castle because it is not allowed to use the camera inside the Neuschwanstein castle.

Since When is Neuschwanstein Castle Opened To Public?

You decided to visit the Neuschwanstein castle?

We bring you all the information you need to know before your visit.

Whenever you decide to visit the fairytale castle, you won’t regret it because it is gorgeous and magnificent during the whole year.